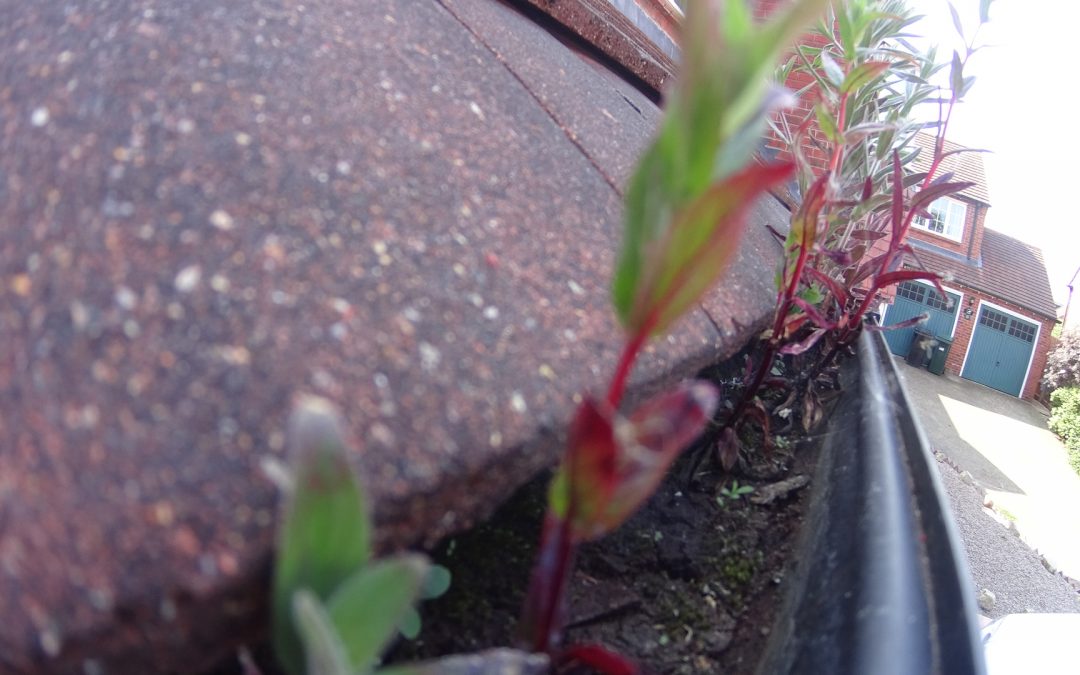 Michael Worpole first started Gutter Cleaning Perton in 2016 and a common problem with gutters in the Perton & Pattingham area is blockages caused initially by moss. Although at first glance, a thin layer of moss in the gutter can seem like it’s not going to cause any trouble, the moss can trap airborne seeds.

At a smart, semi-detached property in Perton, the home-owner spotted some green growth in the corner of a gutter which triggered a call to GutterPRO. Guttering that runs around corners, slow the flow of rain-water and it’s common to see growth in these areas if they are not maintained by a regular gutter clear.

In this case, seeds trapped in the moss had germinated and the root ball had grown unseen from the ground. By the time the shoots were visible, the water that could flow past the growth had been reduced to a trickle. In heavy showers, the water would overflow the guttering and run down the fascia boards onto the patio below where green algae had started to form.

Using the GutterPRO system, a full camera survey revealed smaller growths in other parts of the gutter. The specialist vacuum system used by GutterPRO can reach gutters even in awkward sport like over conservatories or extensions. The gutters were then cleared, without causing mess, taking out the weeds and the moss layer in all the gutters on the home. The CCTV pictures confirming that the results were clear gutters, working effectively.

It normally takes Michael around 2 to 3 hours to complete a gutter clear in Perton, although GutterPRO operate a fixed-price system that means the price you are quoted, is the price you are charged. GutterPRO don’t add on any extras where gutters have weeds or turf growing, and always share the before and after photographs.

Interested in Gutter Cleaning Perton? To get a price call Michael on 0800 112 0123 or simply put your post code in the box to get an instant price.

Simply enter your postcode below

Fully insured, fixed prices, no matter how long it takes.  We make it really easy to book, see the work we have done, and offer cash, cheque and credit or debit card payments at your door.  It’s the GutterPRO way.